The coach Vincenzo Montella is working at integrating the new signings and develop a strong winning team. Bonucci, who is the skipper of the side, is pleased with the progress so far but admits that they are “only at the start.” He claimed Juventus and Napoli are “a little ahead” of them so they would need to improve and become more of a team. END_OF_DOCUMENT_TOKEN_TO_BE_REPLACED

“All we needed to do was look Donnarumma in the eyes to see if he wants to stay at Milan, and we could see that he wants to. But now we have also got to talk with his agent. We wanted to talk with him to understand how much the lad is attached to these colours. END_OF_DOCUMENT_TOKEN_TO_BE_REPLACED “When I was at Milan, we played a friendly game at the Camp Nou and after the game, Pep Guardiola called me into his office inside the stadium. He asked me if I would like to play under him at Barcelona. It was very nice for me, to have been asked to his office and told that. At that time, Milan would never have allowed me to leave though,” Pirlo said recently in an interview with L’Equipe. END_OF_DOCUMENT_TOKEN_TO_BE_REPLACED

Sergio Barilla, the agent of AC Milan striker Carlos Bacca has denied the reports which suggest the 30 years old Colombian international is on his way to leaving the club.

The agent reiterated that his client is fully committed and happy in AC Milan and does not intend to leave the San Siro anytime soon.

Bacca, who joined AC Millan from Sevilla for a transfer fee of €30 million, was a subject of transfer speculations all summer with top clubs in Europe like Arsenal, Paris Saint-Germain and West Ham all gunning for the signature of the prolific AC Milan attacker.

At the beginning of the season, the 30-year-old striker revealed he almost completed a move to Paris Saint-Germain, with West Ham united manager claiming Bacca favored a move to Arsenal. END_OF_DOCUMENT_TOKEN_TO_BE_REPLACED 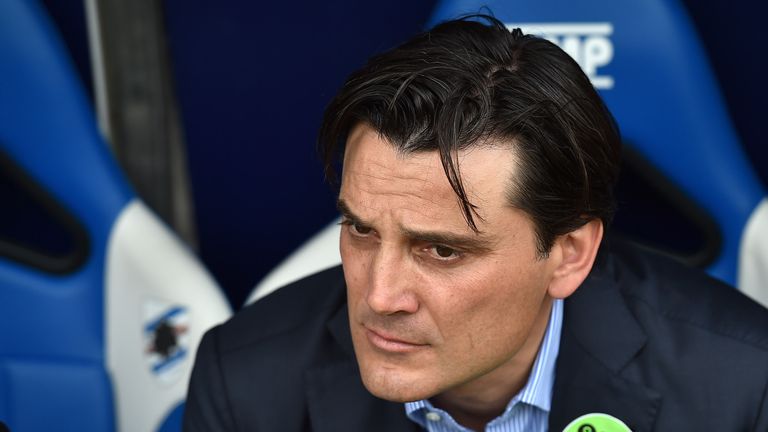 Vincenzo Montella believes that the only way for AC Milan to get back to the top of the Serie A will be to get the fans back behind the team. He said that this is not a new problem and that it is up to the players to change that. He said that fans are not angry with the team or with the coach, but they are just disappointed with the way the club has been playing for a few seasons now. END_OF_DOCUMENT_TOKEN_TO_BE_REPLACED

Vincenzo Montella had a desire to wear AC Milan shirt when he was playing the game, but, he could not have that desire turning into reality as the Rossoneri did not come to him seeking his services at any point.

However, now that it has been quite a long time since he hung his boots, he is going to be in Milan shirt, not playing, but, coaching the team and in his first interview he joked that even though his hairs are starting to change their colouring and become slightly greyish, he can still be useful to the Italian giants. Montella says he got himself into coaching post retirement because he was pretty curious about how the coaches work and what sort of pressure comes with the job. According to Montella, the coaches who are his role models have worked at AC Milan and they have set great benchmarks and he would also want to touch that level and get Milan dominating at the country level and at the continent level. END_OF_DOCUMENT_TOKEN_TO_BE_REPLACED

There has been a Chinese consortium granted specially for sale and there will be negotiations which will take place over the coming weeks for an agreement before 15th of June. It is indeed promising and also had opened the door for Milan as it has become a good proposition as far as the target for summer transfers is concerned. The rise in investment as well as financial power in the market can let the Rossoneri to look for high profile names that include the former player Zlatan Ibrahimovic, the Swedish footballer recently expressed his desire to join back San Siro. He said that he had a good relationship with AC Milan and has a genuine concern for them as the club has been the biggest one that he has played for. He said that he was reluctant to leave Milan and it was due to other people that he had to take the extreme step. He is very keen to return and has said the news will soon be revealed. END_OF_DOCUMENT_TOKEN_TO_BE_REPLACED

On the international level, Cesare Maldini will manage the Italy senior team during the period 1996-1998. He will help the team qualify for the 1998 World Cup in France. Despite having a host of talented players at his disposal, he will only make it to the quarter-finals where Italy will be eliminated by the host and future winners France. The former AC Milan defender will be criticized in Italy for his defensive tactics that led to the elimination. END_OF_DOCUMENT_TOKEN_TO_BE_REPLACED

The transfer never got completed and now Keylor Navas will continue his career with Real Madrid and even though he was an expendable player for Real Madrid, Florentino Perez stated that Navas is highly regarded and praised in the team. When Perez was questioned about the current situation involving Keylor Navas, the president of Real Madrid replied by saying: ‘I have no doubt that he will be very good for us, this season too. The fans love him very much; he’s highly regarded by the club and the coach. He’s in a condition to play“. END_OF_DOCUMENT_TOKEN_TO_BE_REPLACED

Paris St Germain have finally confirmed their interest in star winger Angel di Maria. The Manchester United man has been widely linked with an exit at just 12 months after his arrival at Old Trafford. Di Maria is the club record signing at United. Despite starting his life at Old Trafford in the best possible circumstances, his form began suffering in the second half of the campaign.

Towards the end of the season,Di Maria was relegated to being a bit part player in the team. The situation does not seem to have improved even into the pre-season. Manager Louis van Gaal has failed to quell the speculation around Di Maria. In fact, he has stated that the future of the winger still remains uncertain, but he is hoping that he remains at Old Trafford. PSG have been credited as the only club interested in the Argentine. They were interested in signing him even before he moved to Manchester.

Now, though, the French champions are keen on taking advantage of the uncertainty by offering United a substantial transfer fee. Even though it would represent a loss on the £ 60 million that they paid to Real Madrid, United would rather sell him than keep an unhappy player. END_OF_DOCUMENT_TOKEN_TO_BE_REPLACED